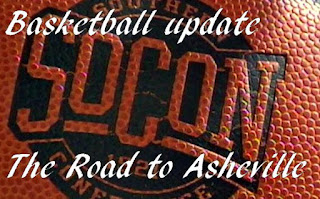 UNCG  at  The Citadel
The UNCG men’s basketball team opened Southern Conference play Wednesday night with a hard-fought 95-87 victory over The Citadel on the road at McAlister Field House. The Spartans led from start to finish to improve to 10-4 on the season and 1-0 in league play. The Spartans’ 10-4 start is the best since the 1995-96 season when UNCG opened the year with a 13-4 record. The Spartans also became the first team in the SoCon to reach double digits in wins this year.  Men’s Basketball Opens SoCon Play With 95-87 Road Win at The Citadel

Mercer  at   Kennewsaw State
Stephon Jelks and Demetre Rivers scored 19 points apiece as Mercer shot a combined 55 percent from the field to hold off Kennesaw State, 80-76, at the KSU Convention Center Wednesday night. The Bears (6-7) limited Kendrick Ray – the nation's fourth-best scorer at 23.4 points per game – to five points while additionally connecting for a season-best 14 three-pointers offensively. It was Mercer's first road win of the year and the sixth straight victory over its intrastate rival.  Hot-Handed Mercer Downs Kennesaw State, 80-76

Mars Hill    at   Western Carolina
The Western Carolina men's basketball team never trailed Wednesday afternoon inside the Ramsey Center but the visiting Lions of Mars Hill kept the game close before a late run pushed the lead out of reach, 87-71. A pair of Catamounts surpassed their career-highs in points while four scored in double-figures. WCU dished out a season-high 20 assists as a number of unselfish plays led for wide-open baskets for the Catamounts. WCU finishes the non-conference portion of its schedule with a 5-8 record which matches last season's record at the beginning of conference play. Catamounts Close Out Non-Conference Play With Victory

Fort Valley State  at  Samford
In its final nonconference contest of the regular-season Wednesday, the Samford University basketball team tallied a 94-74 home victory against the Fort Valley State Wildcats in a high-scoring matchup held at the Pete Hanna Center. Samford finished with five players scoring in double figures as junior point guard Christen Cunningham led the way with 19 points, six assists, three rebounds and two steals. The Bulldogs' dynamic floor general shot 7-of-9 from the field and 5-for-5 from the free-throw line. So far this season, Cunningham is shooting a sizzling 91.8 percent (45-of-49) from the charity stripe.  Bulldogs Cruise To 94-74 Win Over Fort Valley State

Thursday's games......
Only one game is on the schedule for Thursday.

at 8:54 AM
Email ThisBlogThis!Share to TwitterShare to FacebookShare to Pinterest