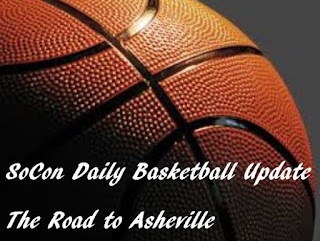 Saturday's results.....
The Citadel at Virginia Tech
Virginia Tech's Ahmed Hill scored a game high & a career-high 22 points leading the Hokies to a 113-71 victory over The Citadel. Preston Parks scored 20 points for the Bulldogs. Tech hit a sissling 60.9% field goals.


ETSU at Morehead State
The Bucs' T.J. Cromer scored a game high 23 points and dished out seven assists to lead ETSU to a 78-68 win over Morehead State. Xavier Moon scored 19 for Morehead, as the Eagles out rebounded ETSU 44 to 36,


Western Carolina  at  UNC Asheville
The Bulldogs' Ahmad Thomas scored a game high 20 points, and MaCio Teague had the game-winning free throws, as UNC Asheville held off the Catamounts 59-57. Deriece Parks led the scoring for Western Carolina with 19 points. The difference in the game was the 20 points scored at the free throw line on 35 attempts. The Cats were hot at the free throw line, but only had 12 attempts, hitting 11.

Chattanooga  at  Vanderbilt
The Commaodores Matthew Fisher-Davis scored a game high 18 points as Vanderbilt survived a scare by the Mocs, winning 76-74  on a last second three-point jump shot by Luke Kornet. Justin Tuoyo scored 12 points and had 9 rebounds for the Mocs.