The Series: This will be the first meeting between the Catamounts and the Eagles 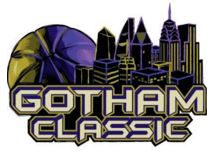 Monday's game against the Eagles will be Western Carolina's second in the Gotham Classic, and will be the Eagles first ever trip to Cullowhee.

Eastern Washington comes to the Ramsey Center with a 5-5 record, are 1-4 on the road, and have lost their last two games. However those two losses were to Davidson and Pittsburgh. The Eagles lost to Davidson by only 10 points.

After ten games, the Eagles are averaging 80.5 points per game, hitting 48.4% of field goals and are making 36.5% of three pointers attempted. EWU has four players averageing double points, led by Austin McBroom at 17.6 points per game. McBroom is followed by Venky Jois with 14 ppg, Bogdan Bliznyuk with 13.8 ppg, and Felix Von Hofe at 13.3 ppg. Jois is also the leading rebounder for the Eagles, pulling down an average of 7.2 rebounds per game. The Eagles are hitting 67.2% of their free throws.