It's now 18 days until kickoff of Catamount football against the Mars Hill University Lions in E.J.Whitmire Stadium on September 5th in Cullowhee.

Utilizing the 2015 Preseason Football Roster, #18 is to Bryce Wilson 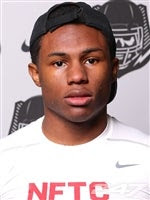 Prior to Western Carolina: Was a three-year starter at Carver HS where he was a three-time team defensive back MVP ... Twice earned all-region honors in his final two seasons ... Tallied five touchdowns as a senior including three on offense and two defensively ... Team captain as a senior ... Finished his prep career with 10 career interceptions ... High school coach was Darren Myles.

Personal: Full name is Bryce D. Wilson ... Is the son of Eric and Adra Wilson ... His father played baseball at Morehouse College ... Has three siblings: Rayah, Raven and Reece.