For the 2022 season's sixth game, the Catamounts return to the road and travel to face a nationally ranked team. After facing nationally ranked Samford just two short weeks ago, the Cats will travel to Macon, GA to face the #12 nationally ranked Mercer Bears.
The Bears finished the 2021 season in second place and were picked to finish the 2022 season in third place by the coaches in preseason voting.
Game #6 - The Mercer Bears
When: Saturday, October 8, 2021
Time:  4:00 pm
Where: 5 Star Stadium, Macon, GARadio: Catamount Sports Network   -Play-by-Play:  Gary Ayers • Daniel Hooker • Producer: Jeff Bryson
TV/video:  ESPN+
-Play-by-Play: Frank Malloy (PxP), Phil Cox (Color), Megan Birdsong (Sideline)
Live Stats:  Mercer Live Stats
Game Notes:  Western Carolina    -     Mercer      -    SoCon Weekly Notes
Fan Message Board:  MU Bear Down
The Series: In only the 9th meeting between the two teams, the Cats own a 2-6 overall record against the Bears, having dropped the last six (6) games played in the series. The Cats are 1-3 against the Bears in games played in Macon.

Last Season's Game vs. Mercer (October. 9, 2021) - Benjamin Scores Twice, Comeback Falls Short on Homecoming - Western Carolina rallied from a two-touchdown, first-half deficit on Saturday afternoon, clawing back even early in the fourth quarter on a Richard McCollum field goal. However, Mercer capitalized on a pair of fourth-quarter miscues by the Catamounts to spoil WCU's annual Homecoming game with a 34-24 victory in Southern Conference action in front of 11,123 at E.J. Whitmire Stadium / Bob Waters Field.

Last Season's Record (2021 Mercer): 7-3 overall, 4-1 home, 3-2 away, 6-2 SoCon
This Season's Record (2022 Mercer): 4-1 overall, 2-0 home, 2-1 away, 2-0 SoCon
Head Coach: Drew Cronic was named the 20th head football coach in Mercer University history on December 10, 2019. He spent the previous two seasons as the head coach at Division II Lenoir-Rhyne University in Hickory, N.C. A native of Sharpsburg, Ga., Cronic is considered one of the more innovative offensive minds across all levels of college football.
Cronic's Collegiate Record: 59-15
Cronic's Mercer Record:  16 - 10
Kerwin Bell's record vs. Mercer:  0 - 1
Drew Cronic's record vs. WCU:  2 - 0
Mercer Offensive Formation:  Multiple (Spread Wing)
Defensive Formation:  Multiple
Mercer Starters Returning/Lost :
Offense:  8  /  3
Defense: 7  /  4
Total:  15  /  7
Mercer was picked third in the preseason coaches poll and tied for second in the preseason media poll after going 7-3 overall and 6-2 in the SoCon last season, finishing a game back of ETSU. The Bears return eight starters on the offensive side of the ball, seven on defense, and three on special teams and have seen punt returner Devron Harper and defensive back Lance Wise earn preseason All-America honors.
While the Bears enter the game nationally ranked at #13, the Bears have lost only one game, to FBS opponent Auburn, 16-42.  However, is the crew from Macon overrated?  Let's take a look... While  Mercer has victories over 4 FCS teams, including two conference wins, they did win all 4 games in convincing style.  However, the Bears have yet to win a game over any team with a winning record.
Mercer convincingly beat Morehead State 63-13 in Macon to open the season (Morehead State is currently 2-3 on the season).  The Bears then took care of SoCon member, The Citadel, 17-0 (the Bulldogs are currently 1-3 overall), next Mercer traveled to Boiling Springs and took care of Gardner-Webb, 45-14 (the Running Bulldogs are currently 1-4, with a lone win over D2 Limestone). Lastly, the Bears traveled to Sparkle City and easily handled the Terriers, 42-7 (as you know, Wofford is currently winless this season standing at 0-5).   So, in my opinion, it's the Bears that have something to prove, in facing their first team with a winning record.   While the below stats look impressive, just remember, they were made against teams that will probably end the reason with very poor overall records.
The Cats have an opportunity in the next two weeks to gain some serious respect not only in the SoCon but in the entire FCS as well.  Let's hope they don't blow it. 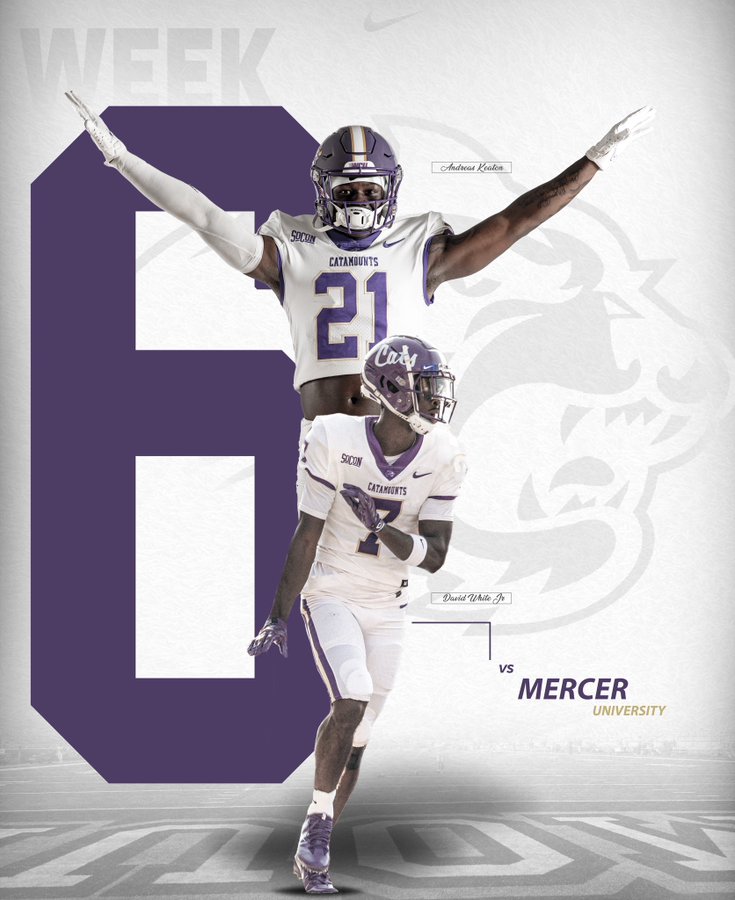 at 4:48 PM
Email ThisBlogThis!Share to TwitterShare to FacebookShare to Pinterest