For the 2022 season's third game, the Catamounts return to the friendly confines of EJ Whitmire Stadium for the first time this season to face the Presbyterian Blue Hose in a "White Out" game in Whitmire.

The Blue Hose finished the 2021 season in eleventh place in the Pioneer Football league
.

PC Offense - Returning/loss:  5 / 6
PC Defense- Returning/loss:  5 / 6
Special Teams - Returning/loss:  1 /  2
First-year head coach Steve Englehart will have his hands full this season directing the Pioneer Leagues' only conference winless team, the Blue Hose.  PC was also picked to finish 11th in the Pioneer Leagues coaches' preseason poll for 2022.
With the 2021 PC quarterback starter (redshirt sophomore) Ren Hefley not on this season's roster, last season's backup (sophomore) Jake Davis will battle sophomore Warner Bush for the starting position. All three quarterbacks listed at the top of the Blue Hose pack are enacting their collegiate debut seasons, along with two defensive backs and one offensive lineman, wide receiver, edge rusher, and return specialist at the top of PC's depth chart. Redshirt-junior transfer QB Nate Hayden has gotten the start on both games prior to the trip to Cullowhee.
The Blue Hose come to Cullowhee with a 1-1 record, losing to Austin Peay on the road (0-63), and beating NCCAA's  Virginia University of Lynchburg at home (21-13).  Coach Englehart and co. represent a sizable overhaul in the PC depth chart to begin the season, starting 13 underclassmen on both sides of the ball, including seven true freshmen.
"The Catamounts open the home portion of their schedule on Saturday, Sept. 17, hosting Presbyterian at Bob Waters Field / E.J. Whitmire Stadium in Cullowhee. The home opener includes a "White Out Whitmire," the 2022 Freshmen Run, WCU honoring its members of the Southern Conference's 100th Anniversary team, and the first performances of the "Pride of the Mountains" Marching Band. Fans are encouraged to wear their white WCU gear to the game as the Catamounts will match with their white Nike uniforms and will sport the vintage "The Cats" logo on their helmets. The first 5,000 fans through the gates will also receive a free "White Out" T-shirt. The Carolina Soul Band will be performing during tailgating just south of the Stadium Lot beginning at 1:30. The free concert is courtesy of Ingles."
2022 Presbyterian Stats (2 games) 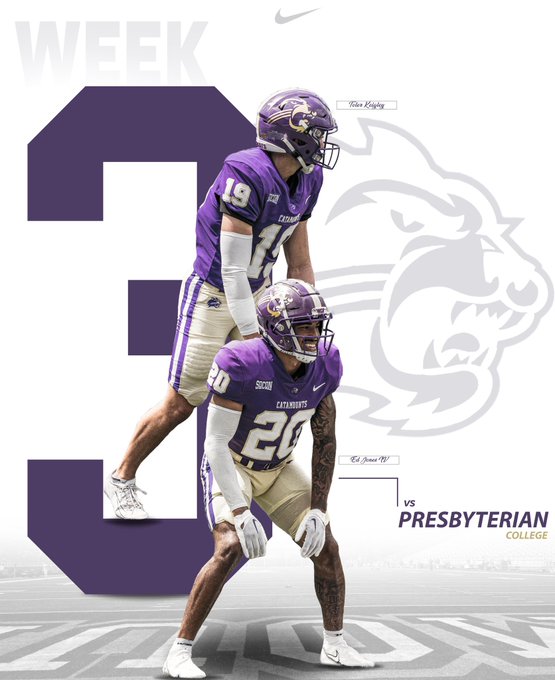