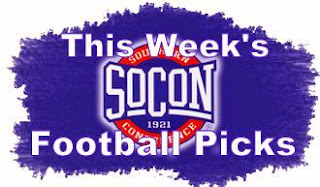 It's week #12 in the SoCon, and time to pick Saturday's games.  5 games are on the schedule this week, with one out of conference game and 4 conference games.

-VMI (4-6) at Army (4-6)  12:00 noon - watch on CBSSN
The Keydets travel to West Point to face the Cadets of the US Military Academy, VMI beings a three game skid to the contest, while the Knights are riding a one game win streak.  Looks like it will be two in a row for Army, as they roll to a 35-14 win.

-Mercer (4-6) at ETSU (2-8)  1:00 pm - watch on ESPN3
Mercer travels to Johnson City hoping to add a little more misery to the ETSU fans, as the Bucs bring a 6 game losing streak into the contest. The home-standing Bucs have other thoughts, and pull out a 21-14 win over the visiting bears.

-Furman (7-3) at Wofford (6-3)  1:30 pm - watch on ESPN+
In what will probably be the deciding game for the Southern Conference title, the Palading travel the short distance to Spartanburg to face the Terriers. While the Terriers have improved as the season progressed, I don't think the Paladins will have a letdown with all the marbles up for grabs. Paladins win, 28-21 over Wofford.

-Samford (4-5) at Western Carolina (3-7)  2:00 pm - watch on ESPN+
The Bulldogs travel up the mountains to play the Catamounts, in a contest that both teams desperately need to win.  The Cats are riding a two game win streak into the game, while the Dogs bring a 2 game slide into the contest.  The Cats prove the other two wins were not a fluke, and pick-up a 7 point win over Samford, 35-28,

-The Citadel (6-4) at Chattanooga (5-5)  2:00 pm watch on ESPN+
In what maybe today's toss-up game, the Bulldogs travel to Chattanooga, TN to face the Mocs. While the Mocs are defending the home turf, the Bulldogs have been a very difficult team to defeat on the road.  I'll give the Bulldogs the edge to pull out a 28-24 win over the Mocs.