“What a great day to be a Catamount,” Head Coach Mark Speir said. “Today is a very exciting day. It is the culmination of a lot of hard work and effort, first and foremost by these 14 student-athletes we signed today to join our football family. This is a great group that will be invested in this program and helping us continue to build on the foundation laid by our previous players here in Cullowhee.” 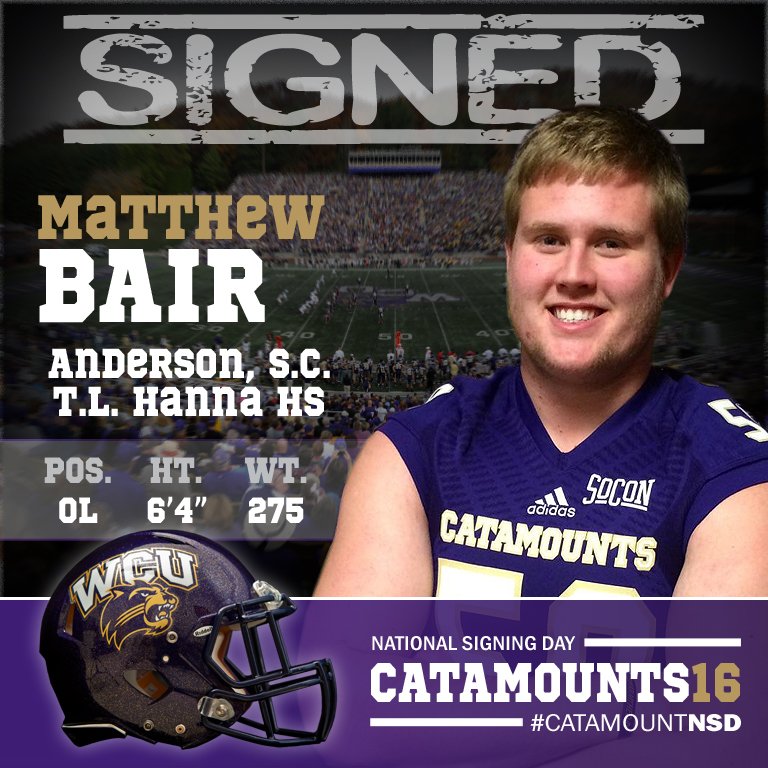 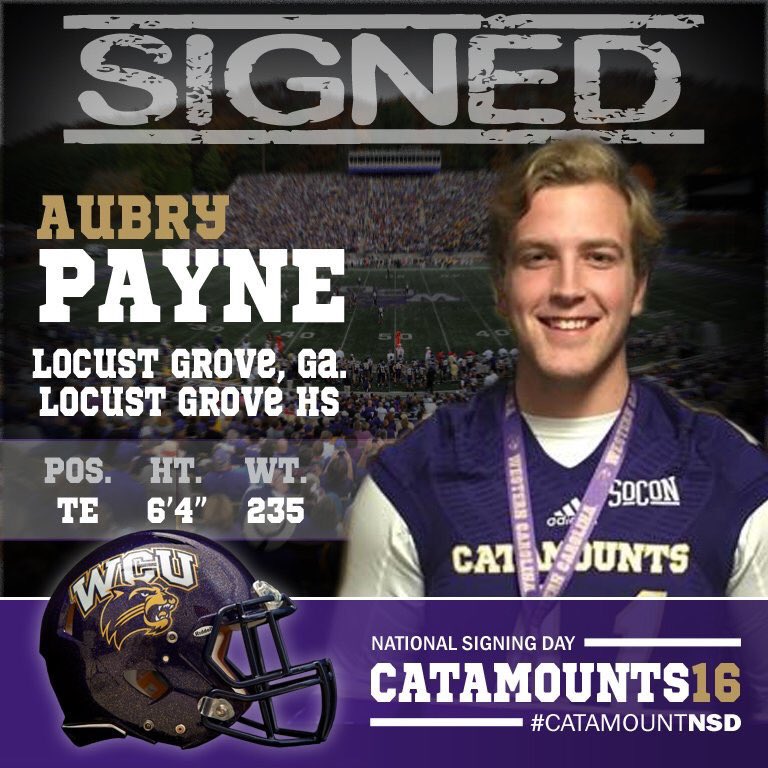 Aubry Payne
TE - 6-4 - 235 lbs. Locust Grove, Ga. (Locust Grove HS)
Prior to Western Carolina: Two-time first team all-region selection ... Received second team Class AAAA All-State honors from the Georgia Sports Writers Association, as well as first team All-Metro ... Had 30 receptions for 575 yards and five TDs as a senior ... Was a five-time player of the week selection including three as a senior ... As a junior, caught 15 passes for 209 yards with an average of 13.9 yards per reception with five touchdowns ... Also had 21 tackles with a sack as a defensive end ... Listed as a two-star athlete by both Rivals.com and 247Sports.com ... High school coach was Clint Satterfield.
Personal: Full name is Aubry William Payne ... Is the son of Scott Payne and Jennifer Prater ... Has four siblings; Ashtin Prater, Triston Payne, Robbie Prater and Mitchell Prater. Note: Chose Western Carolina over East Carolina, Cincinnati, Mercer, Presbyterian and Georgia Southern ... Was recruited by Mark Rhea.

Bailey Byrum
OL - 6-7 - 310 lbs. Sweetwater, Tenn. (Sweetwater HS)
Prior to Western Carolina: Three-time all-county selection and a two-time all-district honoree ... As a senior, was named All-State by both the Tennessee Sports Writers Association (TWSA) and The Examiner.com ... Selected as the Region 2-AA co-Offensive Lineman of the Year and was the Advocate Democrat lineman of the year ... Played for the East squad in the Toyota East-West All-Star Classic ... Graded out with 158 career pancake blocks over three seasons including a career-high 72 as a senior with 95 career knockdowns, 64 in his final season ... As a junior, was named a MVP at a National Playmakers Academy camp held at Tennessee State Univ. ... Listed as a three-star athlete by 247Sports.com and a two-star standout by Rivals.com ... He is considered the No. 124 offensive tackle in the nation and the No. 26 overall player in the Tennessee Class of 2016 ... High school coach was Ethan Edmiston.
Personal: Is the son of Eddie and Laura Byrum ... His grandfather, David Michael "Big Dog" Vestal Sr., played football at the University of Tennessee where he was on the Vols 1956 Sugar Bowl team ... His uncle, David Vestal Jr., played football at ETSU. Note: Chose Western Carolina over Jacksonville State ... Was recruited by John Holt. 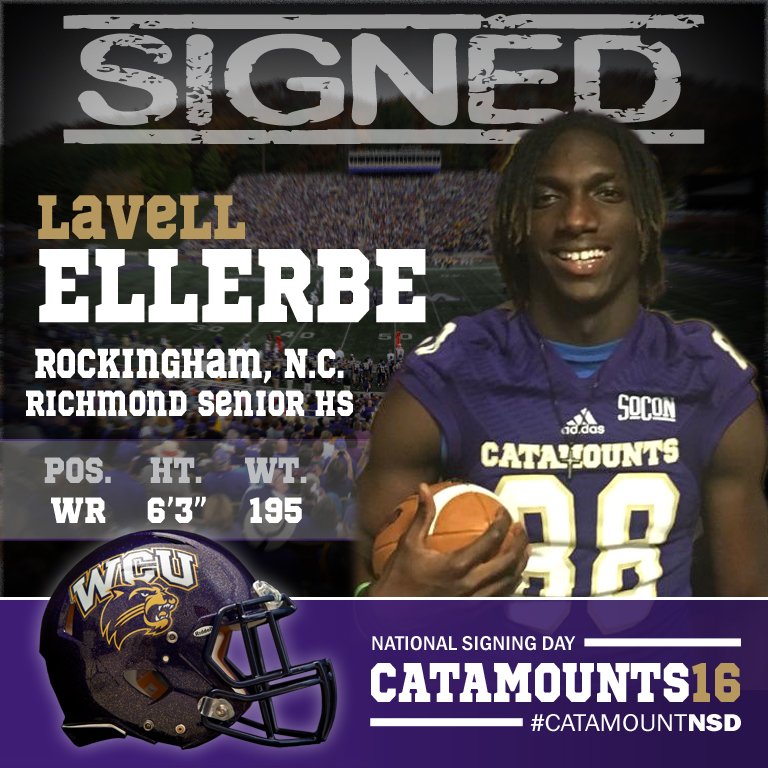 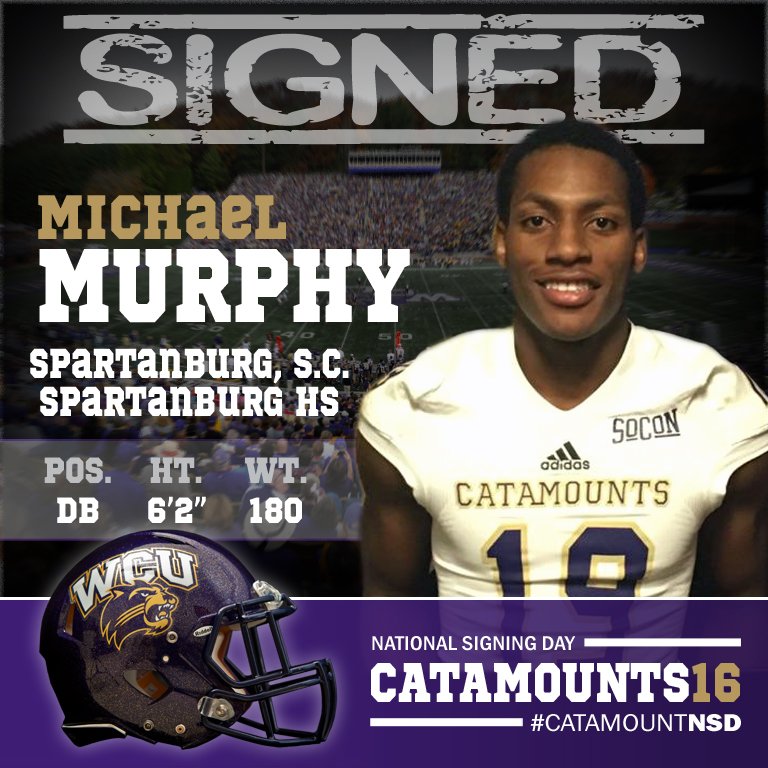 Michael Murphy
DB - 6-2 - 180 lbs. Spartanburg, S.C. (Spartanburg HS)
Prior to Western Carolina: Was an All-Region II-4A selection and named second team All-Herald-Journal/GoUpstate All-Area team ... Recorded 43 tackles with four interceptions and three pass break ups as a senior ... Was part of the 2014 South Carolina state championship team as a junior in 2014, finishing with 88 tackles and three interceptions from his safety position ... Was cited as one of the top 10 defensive backs at an EPT Football Skills Showcase prior to this senior year ... Listed as a two-star prospect from Rivals.com ... High school coach was Chris Miller.
Personal: Full name is Michael Anthony Murphy Jr., and goes by "Mike" ... Is the son of Michael Sr. and Tamika Murphy ... Has one sibling, Malik. Note: Chose Western Carolina over Mercer and South Carolina State ... Was recruited by De'Rail Sims. 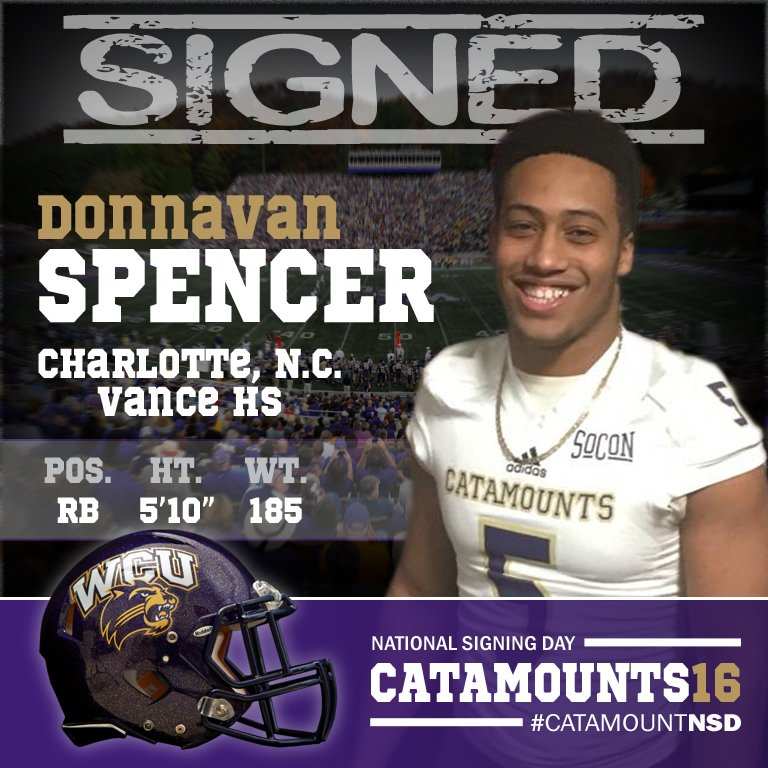 Donnavan Spencer
RB - 5-10 - 185 lbs. Charlotte, N.C. (Vance HS)
Prior to Western Carolina: In October of 2014, became the first Mecklenburg County prep football player to rush for more than 400 yards in a single game amassing 405 yards on 30 carries with four touchdowns ... As a junior, was the runner-up in the 4th Annual Charlotte Football Awards for the Running Back of the Year award and was a third-team offense All-Observer selection ... High school coach was Aaron Brand.
Personal: Is the son of Latasha Spencer. Note: Chose Western Carolina over Boston College, Furman, Toledo and Georgia Southern ... Was recruited by Dennis Thomas. 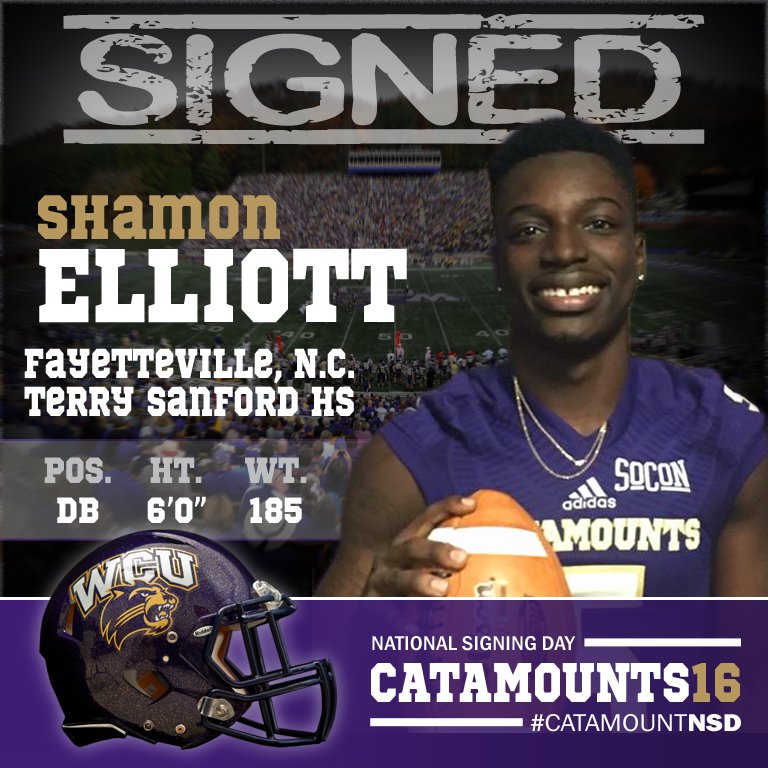 Shamon Elliott
DB - 6-0 - 185 lbs. Fayetteville, N.C. (Terry Sanford HS)
Prior to Western Carolina: Recorded 119 tackles in 2015 - 10th in the Cape Fear region - as a senior ... Added four interceptions and scored a pair of touchdowns in his final season as a prep ... Was a first team All-Cape Fear Valley Conference selection as a senior ... Named second team defense on the 2015 Fayetteville Observer All-Cape Fear Region team ... Helped lead his high school team to back-to-back conference championships and into the third round of the state playoffs in his final two seasons ... High school coach was Bryan Till ... Also played basketball at Terry Sanford HS, helping guide his squad to a North Carolina 3-A boy's state championship in 2015 as a junior - the first for the program in 50 years.
Personal: Full name is Shamon Jerome Elliott ... Is the son of Calvin and Kathryn Elliott ... Has two younger siblings, Imani Elliott and Jah'mez Autry. Note: Chose Western Carolina over Army West Point and Navy ... Was recruited by Pat Mills. 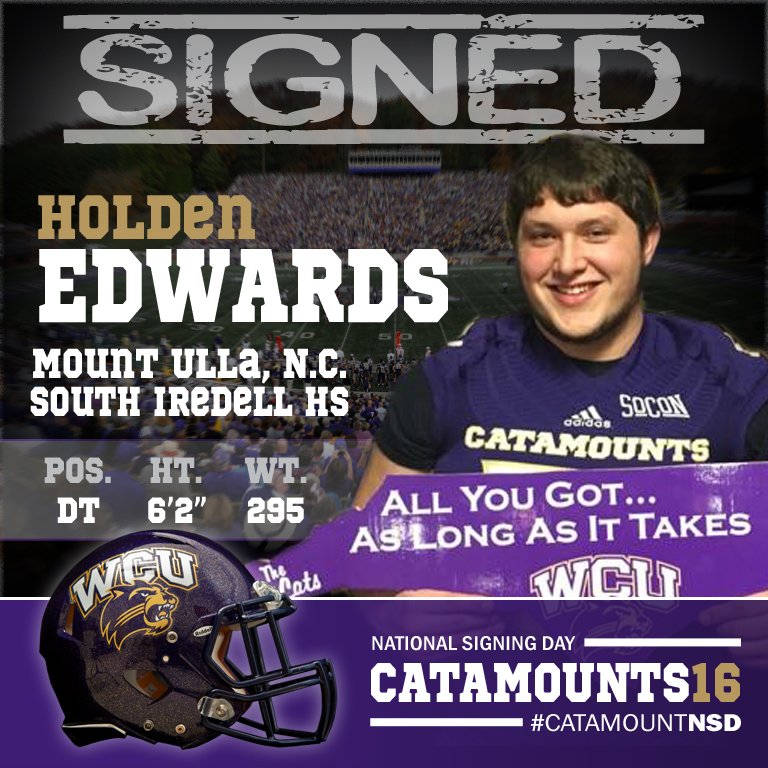 Holden Edwards
DT - 6-2 - 295 lbs. Mount Ulla, N.C. (South Iredell HS)
Prior to Western Carolina: Played on the varsity squad for all four years as a prep, beginning as a freshman with the eight-quarter rule ... Was a two-time All-North Piedmont Conference selection and was twice dubbed all-county ... Recorded 163 career tackles with 50 tackles for loss including a career-best 31 as a senior ... Had five career sacks ... Was a part of a two conference championships as a freshman and senior ... South Iredell HS won the state championship his freshman year ... High school coach was Scott Miller.
Personal: Full name is Holden Kross Edwards ... Is the son of Don Edwards and Kathy Barrow ... Grew up on a farm, working with his father and grandfather. Note: Was recruited by Dennis Thomas. 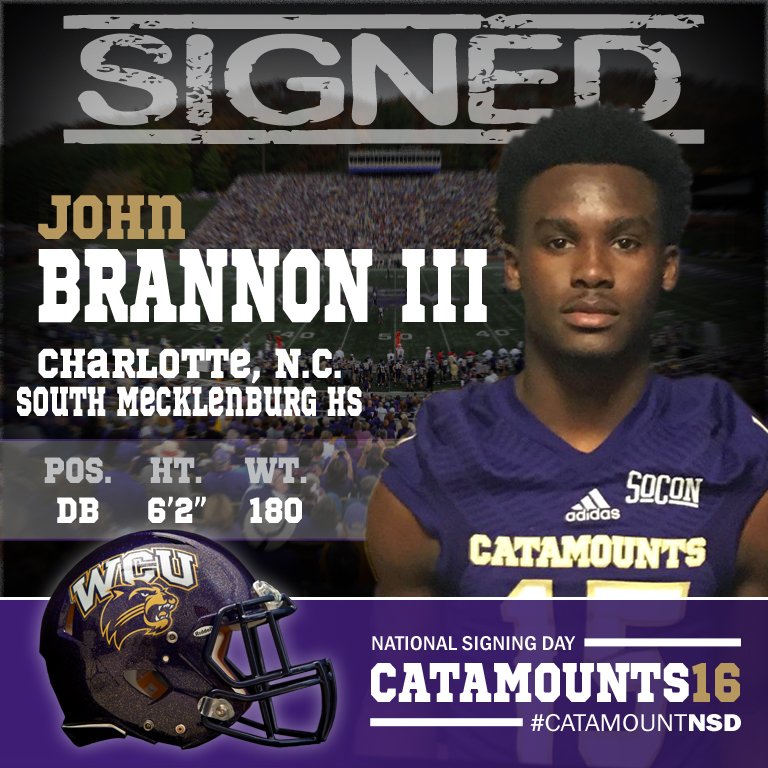 John Brannon III
DB - 6-2 - 180 lbs. Charlotte, N.C. (South Mecklenburg HS)
Prior to Western Carolina: Two-time All-SoMeck 8 Conference selection ... Garnered second team defense accolades on the All-Charlotte Observer team ... Was listed on the South Charlotte "20 to Treasure" list following his senior season which ended with him garnering the publication's Defensive Player of the Year honor ... Posted 56 tackles including six TFLs, a sack, eight interceptions and 13 pass break-ups as a senior ... On offense, caught 24 passes for 98 yards and three scores ... Set as a junior and then matched as a senior a school-record with eight INTs in a single-season ... Also tallied a career-best three interceptions in a single-game ... High school coach was Rocky White.
Personal: Full name is John William Brannon III ... Is the son of John Brannon Jr. and Dana L. Byers. Note: Chose Western Carolina over James Madison and Liberty ... Was recruited by Dennis Thomas and LaMar Morgan. 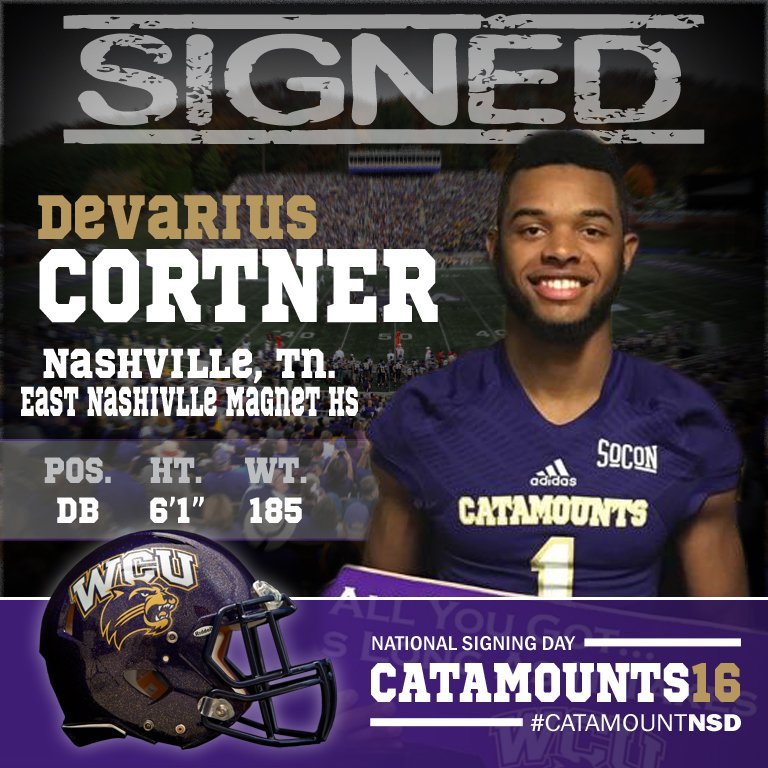 Devarius Cortner
DB - 6-1 - 185 lbs. Nashville, Tenn. (East Nashville Magnet HS) Prior to Western Carolina: Two-way player who played quarterback in addition to defensive back ... Finished his senior season with 1,251 passing yards and 11 touchdowns while rushing for 185 yards and two scores ... Recorded 40 tackles on defense with four interceptions and five pass breakups at free safety ... Received the prestigious Hume Award, an honor bestowed upon the best Metro Nashville football player based on scholarship, sportsmanship, individual performance and value to his team ... Listed as a two-star athlete by both Rivals.com and 247Sports.com ... High school coach was Brian Waite.
Personal: Full name is Devarius Quantez Cortner ... His mother is the late Sherika Cortner ... His guardian is Vanessa Cortner ... Has an older sister, Doncoria, and younger cousin, Nakia Hayes. Note: Chose Western Carolina over Navy, Tennessee Tech and Samford ... Was recruited by LaMar Morgan. 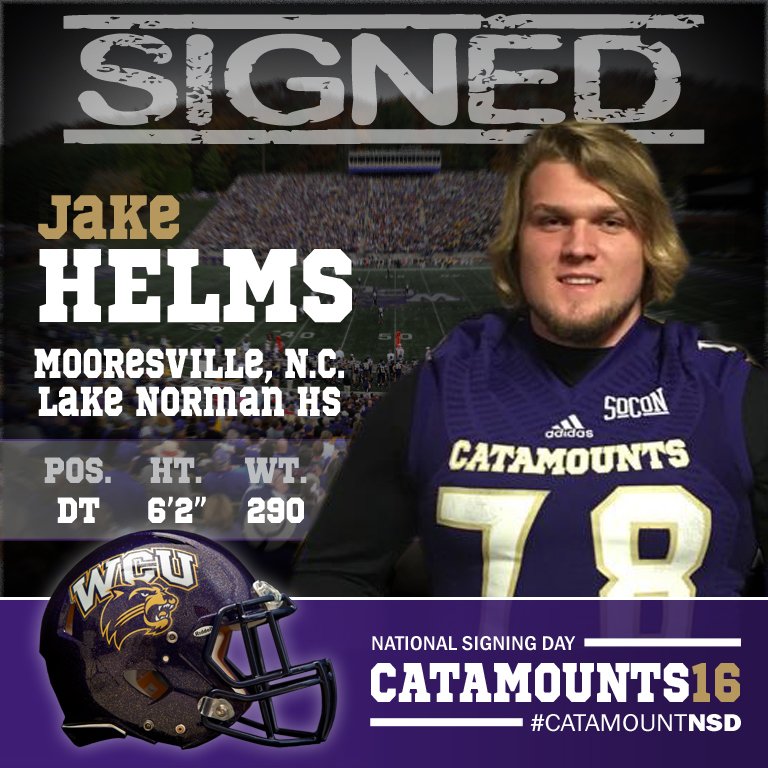 Jake Helms
DT - 6-2 - 290 lbs. Mooresville, N.C. (Lake Norman HS)
Prior to Western Carolina: Finished with 164 career tackles including 27 tackles for loss and 16 sacks ... Forced five fumbles and blocked two field goals ... Named All-North Piedmont Conference as a senior, as well as garnering all-county honors ... Two-time defensive lineman of the year ... Played in the 2012 Eastbay Youth All-American Bowl as an eight-grade offensive lineman ... High school coach was Rob McNeely ... Also participated in track & field as a prep where he holds the school record in the discus.
Personal: Is the son of Kell and Susan Helms ... His father played football at Western Carolina from 1986-90 as a linebacker ... Has a younger sister, Reagan. Note: Chose Western Carolina over Elon ... Was recruited by Dennis Thomas. 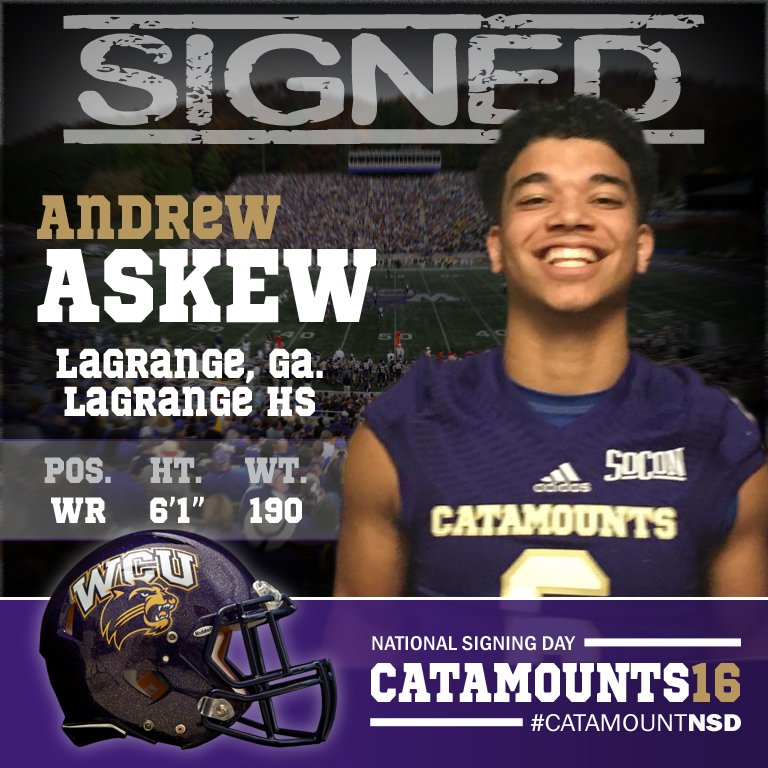 Andrew Askew
WR - 6-1 - 190 lbs. LaGrange, Ga. (LaGrange HS)
Prior to Western Carolina: Recorded 91 catches for 850 yards over his final two seasons as a prep including a career-best 65 receptions for 700 yards as a senior .... Seven of his nine career receiving TDs came in his final year ... Tallied the LaGrange HS position award for Best Wide Receiver as a senior ... High school coach was Dialleo Burks ... Also played baseball as a prep, collecting a .325 batting average as a switch hitter in his junior year with 21 stolen bases.
Personal: Full name is Andrew Michael Askew ... Is the son of Ceola Askew and Amy Mains ... Has a younger sister, Ashlee Mains. Note: Was recruited by Tyler Carlton.

Aaron Maddox
DB - 6-2 - 185 lbs. North Augusta, S.C. (North Augusta HS)
Prior to Western Carolina: Was a first-team All-Aiken Standard selection at defensive back ... Recorded 71 tackles, four pass break-ups, a blocked punt and both forced and recovered a fumble as a senior ... Selected to play in the Border Bowl III ... As a junior, earned North Augusta Star Player of the Week after recovering a pair of fumbles and an interception in a win over Midland Valley ... Earned All-Area accolades as a junior ... High school coach was Brian Thomas.
Personal: Is the son of Richard and Cynthia Maddox ... His father played college football at the University of Arizona where he was a part of the "Desert Swarm Defense." Note: Was recruited by Brad Glenn. 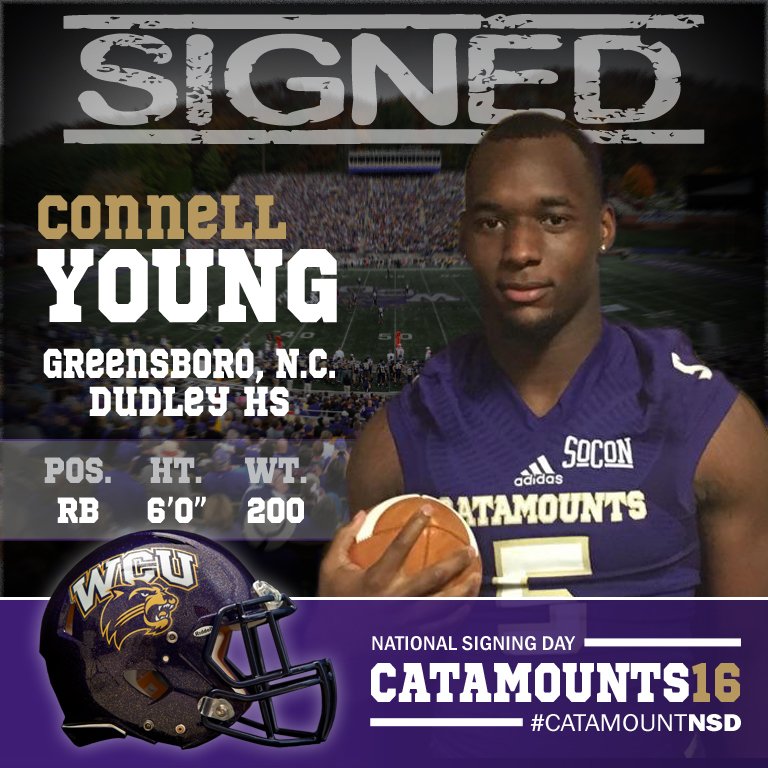 Connell Young
RB - 6-0 - 200 lbs. Greensboro, N.C. (Dudley HS)
Prior to Western Carolina: Rushed for 2,431 yards as a senior on just 237 carries, averaging an astounding 10.3 yards per carry in helping lead Dudley HS to a 13-2 record and berth in the 4-A west regional final ... Scored 27 rushing touchdowns ... Made 40 receptions for 771 yards and seven TDs, averaging 19.3 yards per reception ... As a junior, rushed for 1,051 yards and 11 touchdowns ... Listed as a three-star athlete by 247sports.com ... High school coach was Steve Davis.
Personal: Full name is Connell Jamale Young Jr. ... Is the son of Connell Sr. and Likishen Young ... Has a younger sister, Nisha. Note: Chose Western Carolina over East Carolina, James Madison, and Syracuse ... Was recruited by De'Rail Sims.